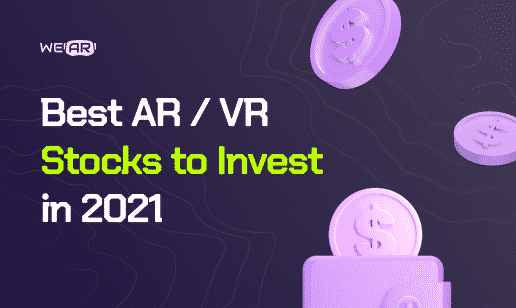 Augmented and virtual reality technologies offer so much more than an immersive gaming experience. Unfortunately, these two technologies might not have grown the way they were expected to because of the expensive headsets and lack of appealing content that is supposed to make them more popular.

But things have changed as both technologies are being used in numerous industries and niches, allowing users from all walks of life to enjoy the perks of XR technology.

So, which stocks should you consider for investment in 2021? How can you book your spot in these growing markets? Keep on reading to find out.

See Also: 5 Examples of Immersive Experience: How Brands Are Using It

The 6 Best VR and AR Stocks to Invest In

VR and AR technologies are opening up doors for multiple companies to make their products and services more accessible. These two technologies are used in everything from employees training to warehouse management, advertising, and offering an immersive user experience. This is why investing in some of the best VR and AR stocks will be a smart decision if your steps are well-calculated.

The following stocks are actually showing great potential because they’re backed by solid technology, so we’re expecting to see them growing in the near future. You should also consider diversifying your risk, so you can reap the benefits of investing in VR and AR stocks.

Ever since it bought Oculus in 2014, Facebook has marked its spot as one of the biggest companies in the world of XR. As a matter of fact, compared to other leaders in this niche, Facebook has been focusing on offering a VR set that is more user-friendly and affordable, and this is what the company successfully managed to do with the Oculus Quest and Oculus Quest 2.

Facebook now has more than 20% of its global workforce focusing on VR and offers its latest Quest 2 at a $299 mark, a price that potential competitors find difficult to compete with and guarantees that it will definitely be one of the best virtual reality stocks 2021.

In order to make use of its popularity as one of the world’s best game console manufacturers, Sony decided to explore the world of augmented and virtual reality with its PlayStation VR headset. This headset offers a remarkably accessible and affordable VR solution for those who want to explore this technology while staying on a tight budget.

Ever since it was introduced to the market in 2016, PSVR became the most popular headset on the market. The company is still working on exploiting this platform but made sure to announce that PlayStation 5 is compatible with this functional VR headset.

As a traditional rival of Sony in the gaming industry with their competitive Xbox console, Microsoft decided to approach the AR market from a different perspective. Instead of offering a virtual or mixed reality headset for gaming lovers, the company offers enterprise solutions with its HoloLens2.

HoloLens2 uses advanced sensors and optics to offer a seamless augmented reality experience that can be used in business settings like training employees and advertising products and services. Having sold more than 500,000 units since its release, any investor should keep an eye on what Microsoft has to offer if they want to invest in a stock that has excellent potential.

If Facebook and other companies are offering VR and AR headsets, then Qualcomm is the engine behind them. This company is the leader in powering the world of XR as it offers key components that are included in virtual and augmented reality tools.

This company’s Extended Reality or XR chip helped it secure ongoing partnerships with mixed reality producers like Facebook and Verizon. Moreover, the company benefited from the introduction of 5G, which enabled it to increase its revenues.

NVIDIA is another leading company in the world of mixed reality, offering high-quality graphics cards that power many of the headsets on the market. As a matter of fact, the success or failure that this company might face has a massive direct impact on the prices of VR and AR tools, as their prices are driven by the shortage or abundance of virtual chips.

Recent studies show that more than 87% of VR users used an NVIDIA graphics card in their VR headsets.

Unity’s current community is home to more than 2 million developers, and the number keeps on growing as the platform is becoming more accessible.

Understanding the ins and outs of the virtual and augmented reality markets can be a challenging task. But at WeAR Studio, you will receive all the help you need to learn more about these new technologies.

We have a dedicated team of experts who are ready to explain all the details to you. So, contact us today, and learn more about how you can take part in these growing markets.