The first robot was invented around the 1950s, but it wasn’t until recently that we started to see more robotics applications in our daily lives that made us realize the potential of this technology.

Robots are currently used in numerous industries, where humans’ presence is unnecessary, unsafe, or impossible. They’re mainly designed to do tasks that might be too dangerous for humans or take more time to be completed. They’re even used in household appliances to make our lives easier.

And just like everything else, VR and robotics today combine to create a better present and future. These two technologies are currently used in multiple applications to help do more work in a safer and even more fun way.

Robots have been used in industrial applications like packaging and manufacturing, while virtual reality showed its fantastic effect in creating immersive entertainment and gaming experiences. So, how can both technologies work together?

You’ve come to the right place because, in this article, we’ll answer this question and more. So, keep on reading.

Why Use VR in Robotics

During the past decade, there’s been a wide interest in leaning towards more automation with reconfigurable systems that can be controlled and adjusted based on changing needs. This involved doing more research on human and robot collaboration to create a customized robotics experience that combines the complexity and reliability of robots with the flexibility of humans.

One of these solutions includes using virtual reality. It introduces the intuitive element that can make the communication between the human and the machine more successful. The combination of VR with robotics will facilitate robots’ operations and guarantee that it will be more satisfactory to humans.

Applications of VR in Robotics

Despite being helpful, some humans might not be satisfied with the way robots function. Some of them are even intimidated by robots. Virtual reality is a practical solution that can make robots work better for humans’ needs in a safe and controllable environment that allows them to achieve their goals.

There are currently various applications where VR and robotics work hand in hand for multiple purposes. VR can be used as safety technology and as a tool that gives users more control over the autonomy of robots.

One of the reasons people might be put off of using robots in several applications is that they feel that they can’t really control them. However, virtual reality provides a way that allows robots to do exactly what humans want them to do.

Using VR headsets, a human can control every action of the robot in a setting where the presence of the human can be dangerous or impossible. For example, humans can use robots in repair jobs underwater or in high temperatures, guaranteeing that the job will be done fast and safely. At the same time, the robot will be linked to the human using VR, so every action, no matter how minor it is, is actually initiated by the user who controls the robot using virtual reality hand controllers.

This can also be a tool to train robots to train different tasks. The robots’ neural element will be able to recognize and break the needed tasks into several sections and eventually become trained to do the task on their own. The visual element in the robot’s camera recognizes the state of the object it’s holding and immediately proceeds to replay an action that was earlier designed and programmed by a human.

Due to human intervention, robots will be able to replicate tasks and even learn to act in unpredictable scenarios, which is something that robots weren’t always good at. This idea is used by a company founded by Elon Musk and currently focuses on training robots.

Despite being extremely functional, VR can actually boost the performance of robots. Developers and trainers can use virtual reality to help robots recognize and understand the nature of millions of objects without having access to them in real life. This allows robots to collect the necessary data that helps them function in the future.

Without having access to this kind of data because the real objects aren’t available, virtual reality can be used to improve the performance of robots using pressure-sensitive sensors that immediately recognize an object and know how to deal with it. Robots can then proceed to execute the task associated with this object.

This application is widely used in the aviation, space, and automotive business. Robots are actually trained to deal with various components without dealing with them in real life, so they can be able to repair and replace them when it’s necessary. In addition, using virtual reality makes the process faster and more cost-efficient.

In addition to training robots to do the job on their own, virtual reality can always guarantee that a human will be in control when it comes to executing the task. The robot is always controlled by the users’ hand motion which is delivered using VR hand controllers. This can be done in a direct or cyber-physical model.

In a direct model, the user is directly connected to the robot, which may result in a delayed signal that affects the final outcome of the robot’s actions. In a cyber-physical model, VR is used to allow the user to interact with a virtual version of the robot and its surrounding environment. This technology is used in situations where it’s potentially unsafe or even impossible for humans to work.

The VR system in these VR-enabled robots acts like the human brain, which processes data, observes images, and controls movement. Humans have total control over the way the situation is analyzed and approached, so they can guide the robot’s grippers to move, push, retrieve, and pick up different objects. The distance between the robot and the object is displayed on a monitor to eliminate the risk of errors.

Robots are currently widely used in the healthcare sector for several purposes. Medical robotics VR training gives doctors, surgeons, and nurses the chance to train in an almost real-life situation without having to deal with actual patients.

Medical students can perform virtual surgeries on virtual patients and learn how to act in several situations where the stress element is eliminated because they’re not dealing with real patients who are currently in a life-threatening position.

VR healthcare robotics are also used to eliminate errors in diagnosis. The robot has a wide library that stores all kinds of data and can successfully do the required scans to detect the issue that might be missed by the doctor.

Surgeons can also use robots to perform surgeries, guaranteeing that they will achieve more accurate results. When accuracy is of great importance, a surgeon can even perform the surgery remotely while controlling the robot using a VR headset or controllers.

Robots are used in the rehabilitation of disabled people after surgeries and accidents, as virtual reality can help them identify the part they need to move. Then, they can use the connection between the VR headset or controller and the robotics arm or leg to control it and move it in any direction.

In a stress-controlled environment, virtual reality can be used to train soldiers to deal with military-grade drones and robots without subjecting this expensive and irreplaceable equipment to damage. Military organizations create virtual battlefields to help new soldiers understand the nature of their assignments, so they can train on using different weapons and drones with various real-like obstacles. As a result, soldiers will be more able to guide their drones on a battlefield and use their weapons when they’re needed.

Since almost 14% of servicemen and women experience depression after deployment, using robotics can help them feel more confident about their missions and purpose.

The use of robotics with virtual reality creates a more advanced training for soldiers, where trainees can create a virtual setup of the battlefield with all its topographical details and man-made structures, so soldiers feel more familiar when they can arrive at their destination. In addition, soldiers will be more trained to deal with various factors that would otherwise affect their performance using a VR robotics simulator.

VR Robotics research is used to optimize space exploration in the most complicated settings. Due to the distance, humans traveling to explore remote planets is still a vision, but robots can make it a reality.

Humans might spend an unrealistically large number of years to reach their destination and eventually land in less favorable conditions, which might make communication with the base challenging or even impossible.

However, robots can be used to deliver the needed information for research purposes without signal delay to send useful real-time data. Robots will reduce latency in the case of lunar missions where the signal can be affected by unknown factors and will deliver the needed data to the researchers on Earth.

VR in Robotics For the Future

The sky is the limit when it comes to what we expect to see when virtual reality and robotics are combined. If you want to know more about these technologies, contact us at WeAR Studio. Our experts will answer all your questions and help you understand the potential of these new technologies and how they can be used in your business. 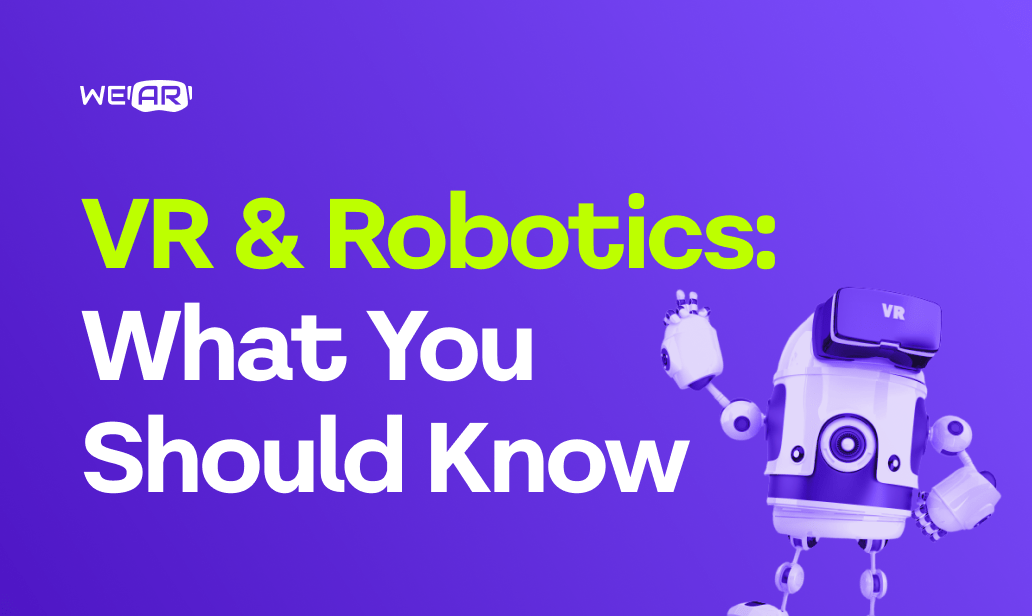 The first robot was invented around the 1950s, but it wasn’t until recently that we started to see more robotics applications in our daily lives that made us realize the potential of this technology.  Robots are currently used in numerous industries, where humans’ presence is unnecessary, unsafe, or impossible. They’re mainly designed to do tasks […]