How to Patent a VR App 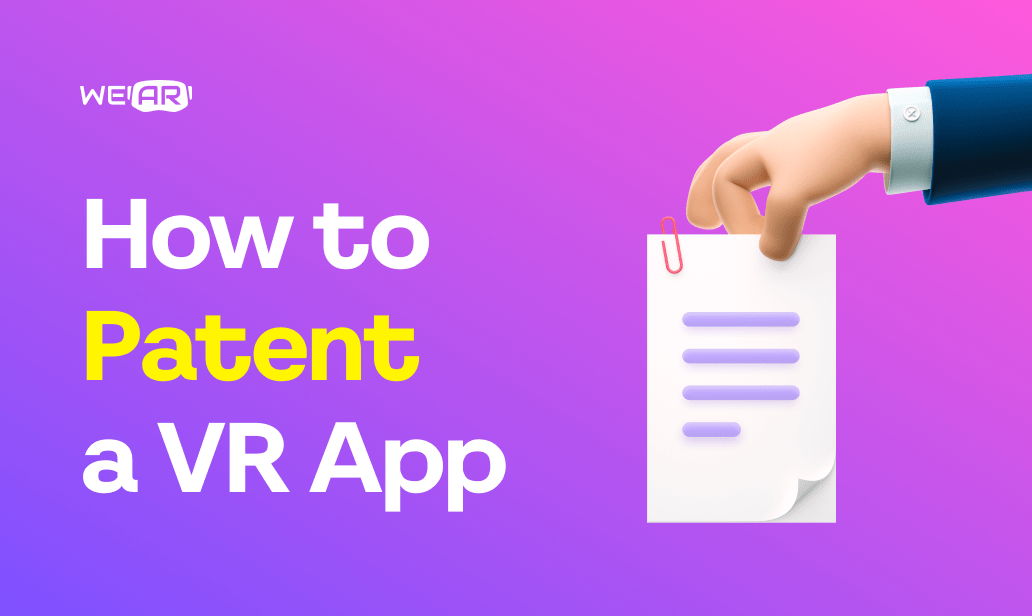 Virtual reality is a revolution in the digital world as it’s changing the face of every industry by adding the immersive element that engages users and makes them more entertained. This is why more developers are working on introducing virtual reality apps to cater to the rising needs of users.

The market of virtual reality still has a lot of room for expansion with the introduction of new applications, games, headsets, and other tools that can make this technology more accessible and affordable. But as more companies are trying to explore the potential of VR, developers, engineers, and other interested parties are interested in knowing how to patent an app and save the rights of those who worked on it until it came to life. So if you want to learn more about VR patents, keep on reading.

What is a VR Patent and Why Do You Need One?

The popularity of VR and AR applications is creating numerous opportunities for developers, engineers, coders, and other stakeholders as there are multiple ideas and applications where these new technologies can be implemented. In addition, VR and AR bring the immersion that other technologies can’t provide. This is why they create the opportunity for better gaming, entertainment, training, education, marketing, advertising, social media sharing, tracking, and maintenance work.

However, with the need for all these applications, there’s always the need to protect the rights of those who worked on the idea, designed the code, and put the effort to change the concept into an app or software program that users can use and benefit from. This is what a VR patent is for.

In the general sense, a patent is a federal grant of an exclusive right given to the inventor. In the case of VR, the inventor is the coder or developer who worked on designing the VR application, and the patent is issued for a certain period of time.

In the US, the patent is granted after a thorough process of investigation and testing to ensure that the invention is worthy and valuable. The patent also gives the creator the right to exclude others from using or selling the created item.

There are three types of patents identified by American law. A utility patent is the most common type as it protects the functionality behind an invention. This includes the designing and manufacturing process and any improvements done to previous items to reach the current status of the product. A design patent is only related to the aesthetic design of an object. Finally, a plant patent is related to creating crossbreeds of plants.

A VR app patent is a utility patent if it meets the USPTO requirements. It should cover a unique software program or hardware component that offers specific value to people. Since virtual reality is an artificial simulation of the real world, each app or hardware component should be unique in nature.

These patents protect the rights of developers and engineers who design useful products, where users can use VR apps or devices for educational, industrial, or entertainment purposes. An examiner looks at the new VR invention and sees if it meets the set standards, and if it does, it’s granted a patent.

How Can You Patent a VR App?

The rapid changes in the VR industry create a more significant need for patents to protect the rights of those who work hard to invent something outstanding. The pressure to innovate and the increasing competition mean that VR applications need to evolve fast, and developers have to come up with new inventions or solutions, or they will be falling behind.

A VR patent is issued to protect the intellectual rights of the inventors as they create useful applications that are crucial to several businesses in various industries. This is why more parties are interested in learning how to patent a VR app.

Patenting new technologies is still a confusing process, so if you’re a developer, you might not be able to follow up with the process from beginning to end. This means that the wrong parties might exploit your invention, and you might lose the money that others are making because of your efforts.

Patenting software like a VR app involves providing proof that this software offers a technical improvement of existing software. For example, the inventor or creator can showcase how the app can provide value in a specific niche like robotic surgery or remote training and education. VR patents can also include hardware components like VR headsets and other devices that allow users to explore this technology.

A committee will examine the new invention or concept and analyze its value. If proven unique, a patent will be granted. In today’s world, a virtual reality app is a must because the industry keeps on evolving and growing, and this means that as a developer, you need to protect your rights. Nevertheless, this process involves a lot of technical and legal aspects that most developers might not be able to do on their own.

Dealing with the administrative part of the patent can be an exhausting process. This is why the big players in the industry always have a devoted and well-trained team to follow up with patent cases until they’re granted.

Due to the increasing competition, big and small companies are all competing to fill the needs of the growing market of virtual reality. However, there’s still big room for new software and hardware improvements to help people use VR to its full potential.

In 2019, Microsoft filed for a VR patent for its virtual reality mat. The company designed this mat to enhance users’ experience and to provide safety as users are using VR headsets while exploring virtual reality.

The idea is to create a safe zone where users are using and enjoying virtual reality applications for gaming, training, and other purposes. The problem with virtual reality is that sometimes the user loses track of the real world and gets confused about its boundaries. In addition, because of the full-immersion experience, there’s a chance for some accidents as users might accidentally hit an object or another user because the VR platform or headset blocks the outside world completely. The map detects the presence of the user or player thanks to pressure sensors, even if the user isn’t detected by the optical sensor.

In 2017, Sony was granted a hardware VR patent after inventing a special VR headset that makes this technology more accessible. People who wear glasses suffered when it was time to wear VR headsets because the glasses couldn’t fit. So, they would either give up the VR experience or be unable to enjoy an immersive experience because of their poor eyesight.

Sony invented a unique pair of virtual reality headsets that people use if they have vision problems. The headsets can be fitted with special lenses to allow for eye-tracking, so users can enjoy this special VR experience.

In 2019, Lyft was granted a VR patent for the new 3D features in its app. The new features process data in virtual reality to create a 3D map that allows drivers to identify pickup and drop-off locations. In addition, the features use the saved data to make the connection between the driver and the rider as seamless as possible.

Such an improvement in the app allows users to use the app more comfortably. People don’t have to keep on scanning the street for the driver, and the driver will be able to identify the rider immediately.

The new app analyzes all the historical information like previous wait times of pickups, locations where congestion happened, riders’ previous ratings of pickup locations, and other useful data. Moreover, the app can be used with X-reality headsets to display this information.

Things To Consider When Dealing with Virtual Reality Patents

Despite the growing need for VR patents, there are some limitations and challenges that face stakeholders when it comes to patenting software and hardware components of virtual reality.

All these reasons mean that if you’re interested in getting a VR patent, you need to work with real experts. They will help you file for and obtain the right patent and will also guarantee that you’ll be able to use it to your advantage.

Get Your VR Help

Do you have a small company that wants to stand out from the competition? You still have a big chance to compete with the big names in the industry if you have the right team behind you. At WeAR Studio, our experts can make any of your VR ideas come true. Don’t hesitate to contact us today.