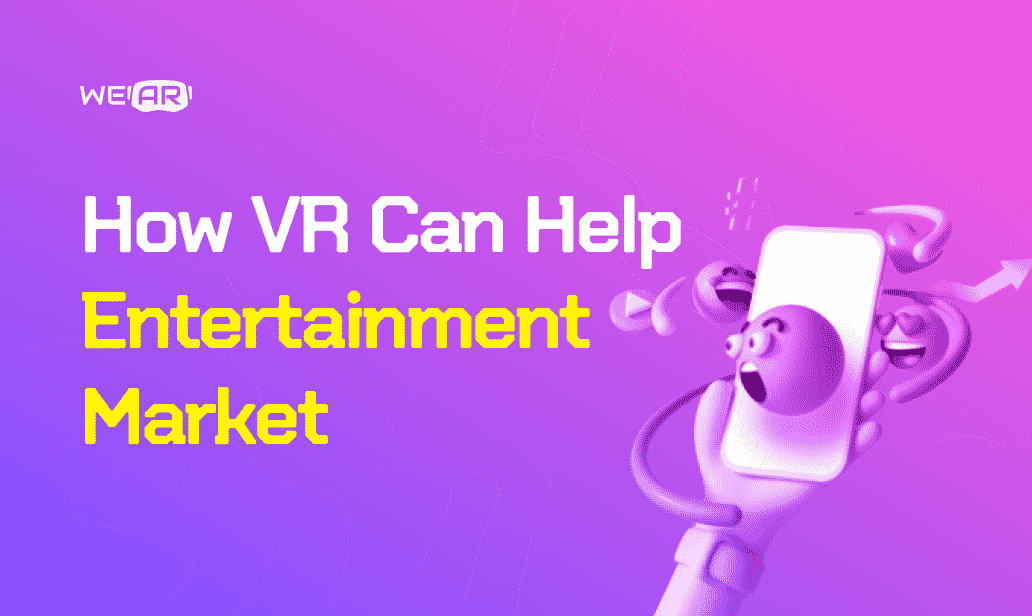 More than 58 million Americans are expected to use a VR application at least once per month. When virtual reality is used in the entertainment business, this number is expected to increase drastically.

Virtual reality is designed to deliver an immersive experience that engages the user. People use all their senses to test and feel a product or service and experience how it can add value to their lives.

The same applies to the entertainment industry. The implementation of VR in entertainment is supposed to make people more engaged with the games they enjoy, shows they watch, and exhibits they attend. This technology is designed to offer users a hands-on experience that makes them feel like they’re part of an event instead of merely watching it.

By engaging all the senses, people are expected to experience a higher rate of satisfaction, which translates into further purchases, increased brand loyalty, and a once-in-a-lifetime experience that they won’t forget.

In addition, VR headsets and other tools will take people on a journey where they can experience art and fun from a different perspective, where images come to life, and people can actually be part of the fun experience that seems real but is still enjoyable and fun.

In this article, we’ll discuss some of the most successful examples of using virtual reality in entertainment and the importance of these applications. So, keep on reading to learn more about them.

Although virtual reality in entertainment has been mainly experimental so far, there are several successful examples that show us the potential of this technology. These success stories act as an inspiration for anyone working in the entertainment business as they’re able to explore new horizons using VR tools and software applications.

Gaming already occupies the biggest share of the VR market share with 61% of total VR applications. On the other hand, about 21% of TV and entertainment applications currently rely on virtual reality technologies.

Both numbers are expected to increase as there are more affordable headsets hitting the market and more applications that make this technology accessible, leading to more success in the VR entertainment market. Here are some of the most successful uses of virtual reality in the entertainment business.

In this game, the gamer takes the role of a wraith and explores the afterlife after a mysterious death, chasing others and gaining supernatural abilities. This is a narrative-driven game with some combat elements, although it’s not the main focus of the game.

The game incorporates survival, action, and adventure elements in a single game. As you progress in the game, you can interact with the real environment. The game is available on several VR platforms like Steam VR, Oculus Quest and Rift, and PlayStation VR.

Derren Brown’s Ghost Train is a dark ride and one of the most popular VR applications in theme parks, where guests go on a ride on a Victorian railway with VR headsets that help them feel more engaged and entertained.

Using HTC Vive headsets, the riders learn about a fracking disaster, explore a modern-day tube station, and later get chased by a demon. One of the reasons why this ride is engaging is that the creators managed to link virtual reality to the real world, an experience that most riders appreciate.

Although not restricted to a single place, Van Gogh Expo has managed to gain a lot of popularity wherever it was set up. The tour is designed to provide art lovers with a hands-on experience where they get to be part of their favorite paintings.

The VR tour is set up so guests can move from one room to another, every time becoming part of one of the artist’s famous paintings. Every corner of the room, including the ceiling, walls, and floor, incorporates elements from the artist’s work.

In addition, the 360-degrees virtual show includes sounds and sometimes other sensory elements like fragrances to create an immersive experience that users will enjoy to the maximum.

This platform offers artists and musicians the opportunity to expand their business using virtual reality and holographic technologies. In addition, users can enjoy their most favorite music tracks with 360-degree immersive video experiences.

As the world’s first virtual reality platform, VRTIFY creates a virtual reality space for music lovers to enjoy the best performances. When users pay for the paid version, they gain access to pay-per-view events. For example, users can move around during live concerts with multi-camera 3D and 360-degrees views.

While enjoying this immersive VR experience, users are expected to feel more connected to the story and are more likely to enjoy the show. Due to the success of this experience, more venues have considered adding a VR element to their performances.

Intone combines the fun of gaming with the excitement of a VR audio experience that users are able to enjoy only with this app. The game starts when you are floating in space with blocks flying around. When you speak, the blocks respond and move around, so you can create a visual and audio reality that you can easily manipulate.

Every hum and letter spoken will lead to a new visual effect, which is one of the reasons why gamers enjoy this app for hours.

VR tools and applications continue to become more accessible in the entertainment world, and if this is your niche, you’ve come to the right place. At WeAR Studio, you will receive help from the best VR experts who are ready to walk you through the process of creating and implementing new VR applications. So book your spot today, and create a new VR experience in your entertainment-related business to become a pioneer.