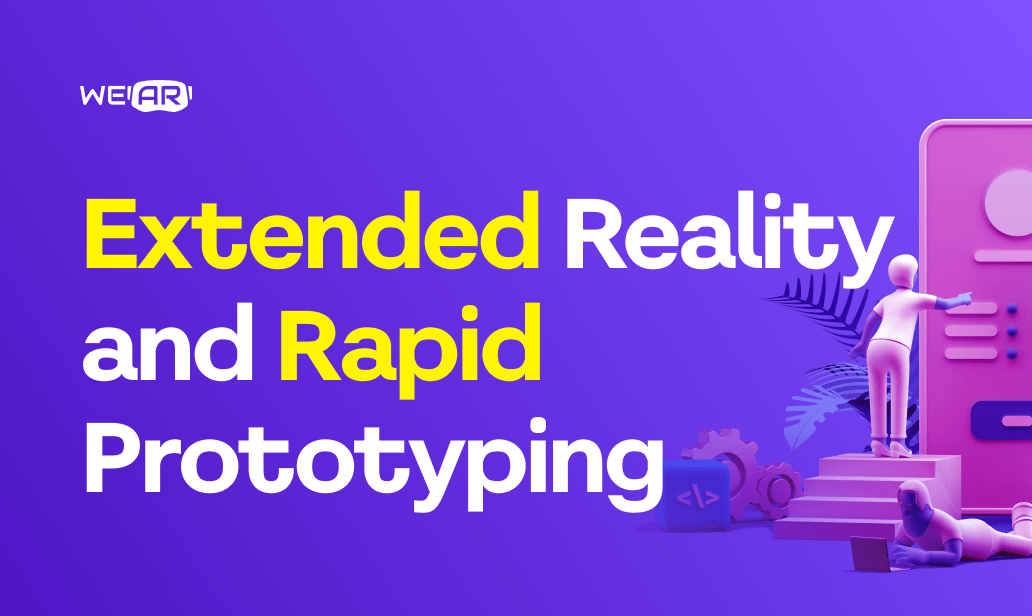 In the 1980s, the world was taken by a new invention called 3D printing that was promised to change the way X-reality technologies are used in several practices. Many different methods and techniques were used to elevate and tweak the concept of 3D printing to make it more accessible and suitable for X-reality applications.

After years of practice and experimentation, scientists were able to reach what we know today as rapid prototyping. Today, creating a 3D model using rapid prototyping is changing the way different industries are using AR and VR for various applications. So, let’s dive into this topic together.

What is Rapid Prototyping?

Rapid prototyping is a fast fabrication of a physical object or model using a 3D computer-aided design and additive manufacturing or 3D printing. The result is an object classified as a high fidelity prototype since there are very few to no differences between the model and the proposed finished product.

Rapid prototyping or RP is made using various manufacturing technologies, like high-speed machining, casting, molding, extruding, and layered additive manufacturing to create an accurate 3D model of the design that was proposed by the designer.

Rapid prototyping can also be used in the digital form, where it refers to a digital product model. For example, this can be the preliminary stage of an app or website that’s being tested by a group of users, designers, and stakeholders.

Why is Rapid Prototyping Important?

Whether it’s used in a physical or digital concept, rapid prototyping is used by the design team to maximize the value of the final product for the people who will eventually use it.

The prototype is usually designed then several areas, or layers are added to it, in the physical or digital concept, for the purpose of reviewing and testing.

In the beginning, the prototype will only contain the core parts of the product, and then it’s tweaked and altered until it reaches the finalized version. This version is then handed to the development team to create the final product.

Using the prototype, the design team and stakeholders will be able to test a sample of the product and get feedback to understand its pros and cons.

The prototype is then used during the refining process, where some areas need to be fine-tuned, clarified, or entirely deleted to create the best version of the final product.

For these reasons, rapid prototyping is a crucial concept in designing any product or service and offers more advantages than other design approaches.

How is 3D Rapid Prototyping Used in X-Reality

Rapid prototyping is one of the latest technologies that is currently incorporated into creating augmented and virtual realities for various purposes. This innovative technology is opening doors to discovery as well as testing and evaluating multiple AR and VR products and services, so the developers and designers can tell if they’re on the right track.

Although prototyping comes in various formats, 3D rapid prototyping provides one of the most convenient ways to help you visualize an X-reality and communicate the problems it presents and the solutions it offers.

In virtual reality, rapid prototyping creates the link between the coding and the actual X-reality product to help various parties understand, assess, test, and evaluate the product. It transfers the data from a 2D computer to a 3D model that resembles the final 3D object used in the VR headset or AR device.

Unlike 2D prototyping tools like Adobe XD or Sketch, 3D rapid prototyping is still a new technology and requires the presence of certain skills and techniques. This is why it’s one of the fast-growing trends in the world of X-reality, as it creates a bridge between 2D and 3D.

What Are The Benefits of Rapid Prototyping in X-Reality?

Designers can work with project engineers to validate features of the suggested design against the expectations of potential clients. This technique allows them to create a mock-up of a product in a virtual or augmented reality concept to test the solution and evaluate its impact and value.

Here are some reasons why this method is currently one of the best ones to test VR and AR applications.

Creates a Bridge Between Coding and Designing

One of the main challenges that virtual and augmented reality developers and designers face is related to how their products will work and function once they’re put into action. A 3D prototype can solve this problem as it will be a mock-up of the final product.

The prototype acts as the link between 2D coding and 3D production and is used for testing. First, the designer works in an empty environment that is solely intended for testing the product and starts placing different assets from an X-reality software to create the perfect testing setting.

Rapid prototyping can easily transform a 2D sketch into a 3D object or scene that is used in a VR or AR app. This allows more people to work on their designs in 2D because it’s more convenient and then import them into 3D for experimentation.

As a result, developers can try different designs to choose the best one based on the user’s field of view, so they can create the perfect AR or VR space.

Better Communication Between Designers and Clients

Rapid prototyping creates a seamless communication channel that allows designers and developers to analyze people’s feedback after using the product. Moreover, it gives them a chance to directly teach the clients about the best or most efficient way of using the product or service.

This prototyping technique doesn’t cancel the need for the engineers who eventually build the product, but it saves them time and eliminates the chance of miscommunication that might arise as different departments are involved in the production process.

One of the goals of every company is to save its resources, and this includes managing the time spent on different tasks and projects. Rapid prototyping provides designers and engineers with the chance to break up a big problem into smaller chunks that are easier to handle. As a result, the person in charge will be more able to identify and fix the problem without having to repeat work from the beginning.

In the case of developing a digital product in augmented or virtual reality, sometimes things don’t go as planned, and the product or code doesn’t work the way it should. In this case, the developer might get confused because they can’t pinpoint the exact problem, so they might start repeating everything from the beginning, although the product is working just fine.

This is one of the main benefits of using rapid prototyping in VR and AR, as it allows the developers or entrepreneurs to work with a measurable solution that stakeholders can find exciting and motivating. The prototype is usually used as a proof of concept or a mock-up to show the value of an app or software solution.

When it comes to X-reality, showing the value of a solution can be a challenging task, especially if the people testing and using the product are skeptical of the technology or don’t know how to use it. A prototype created using rapid prototyping will allow different stakeholders to see the value of this solution and convince them to invest in it.

It’s time to experiment with this new technology to give your business the needed boost. Rapid prototyping is a great way to design and test products that are later used in AR and VR applications because it’s convenient, fast, cheap, and guaranteed.

But for this technology, you need the help of real experts, and at WeAR Studio, we won’t disappoint you. Our team is ready to answer all your questions and will help you create the best prototype for your AR or VR solution using our exceptional rapid prototyping services. So contact us today for a consultation, and explore the world of X-reality like never before.