Let’s get in touch!
We’re ready to turn the most crazy and bizarre ideas into living immersive experiences. Leave us your contacts, and we’ll get in touch!

Augmented reality describes user experiences that add 2D or 3D elements to the live view from a device’s camera in a way that makes those elements appear to inhabit the real world.

The world is living in the era of AR /VR that presents real-time visualization with tracking reality. It empowers users to see the virtual world as real. We can track objects, surfaces, plain, part or full body. The world is already actively using reality tracking and its usage will be only growing.

The essence of Augmented Reality is that your device recognizes objects in the real world and renders the computer graphics registered to the same 3D space, providing the illusion that the virtual objects are in the same physical space with you.

There are several key questions we must ask before a user interacts with the digital world. What content do we display on the live camera view? And where exactly should we put that content within the user’s view? The answer to these questions depends on which application of AR you choose, as each requires different types of user interaction.Accuracy of AR applications or realistic results is depending on the tracking method which is the process of locating a user in an environment. It also takes account of the position and orientation of the AR user.

Once the objects are recognized, users are able to see augmented reality content (3D models, buttons, videos, animations and more) on top of all targets. It is also possible to make the digital augmentations interact with each other. ARKit&ARCore are one of the most used SDK for Augmented Reality tracking

For IOS devices, ARKit combines device motion tracking, camera scene capture, advanced scene processing, and display conveniences to simplify the task of building an AR experience. You can create many kinds of AR experiences with these technologies using the front or rear camera of an iOS device.

For Android gadgets, ARCore is doing two things: tracking the mobile device’s position as it moves and building its understanding of the real world. ARCore enables the phone to sense its environment, understand the world and interact with information.

ARCore’s motion tracking technology uses the phone’s camera to identify interesting points, called features, and tracks how those points move over time. With a combination of the movement of these points and readings from the phone’s inertial sensors, ARCore determines both the position and orientation of the phone as it moves through space.ARCore can detect flat surfaces, like a table or the floor, and estimate the average lighting in its area.

There’s never been a better time to try some of the best AR apps for mobile devices. Augmented reality has arrived on your smartphone, as today’s handsets feature more powerful cameras capable of superimposing immersive graphics on your smartphone screen.

A global network of GPS satellites and internet technologies allow us to use location tracking and accurately pinpoint the location of any device with integrated GPS, internet, and Wi-Fi technology — smartphones, computers, and smartwatches, for example.

Education is a great example of AR usage, and it’s apps like this one that are really starting to pave the way for an AR-centric future. The Civilisations AR app from the BBC gives the ability to see various historical artifacts, locating, rotating, and resizing them as the user sees fit. There’s an extremely handy tutorial when the user first starts the app, which guides through checking out an Egyptian mummy, hearing about its history, and even seeing inside it with an X-ray function. 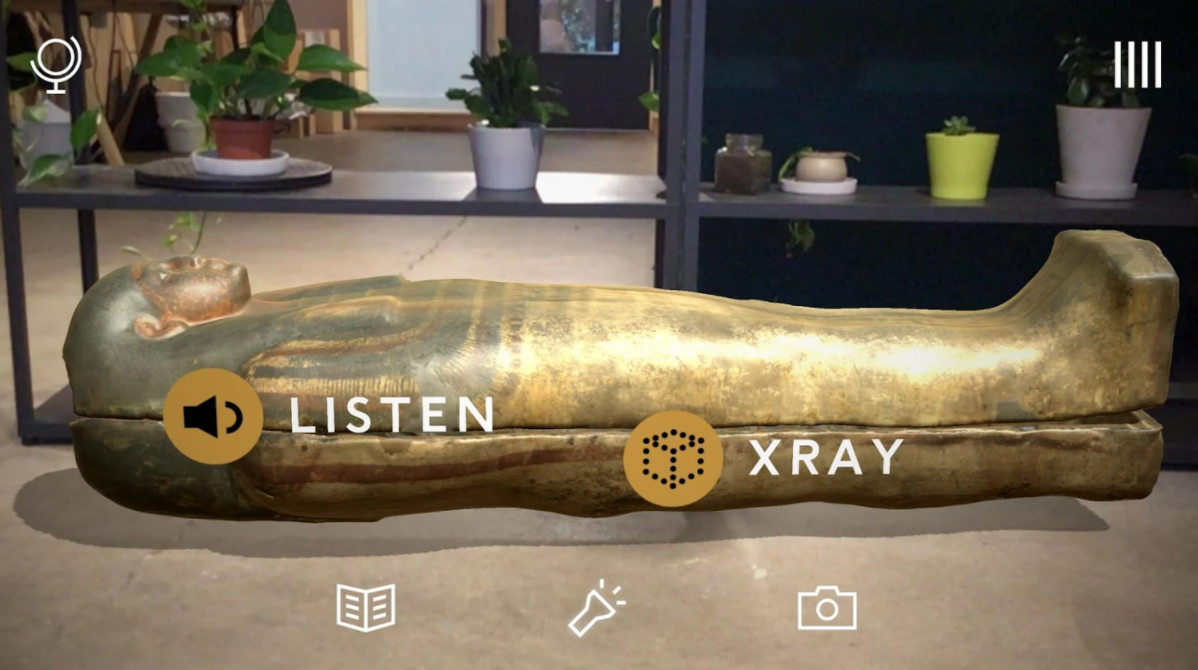 This app allows users to view runs, hikes or cycling routes from Strava superimposed on a 3D map of the terrain. Fitness AR was among the first ARKit-enabled apps and was featured by Apple early on. The app utilized Mapbox’s Unity Maps SDK to visualize the terrain of the paths. Like most other ARKit-enabled apps, what the team built was definitely relatively simple, but it seems people at Mapbox really liked the implementation.

Wanna Kicks is narrow in its scope. Designed specifically for sneaker lovers, Wanna Kicks puts virtual versions of footwear on your feet. You can see what they actually look like if you were to wear them – from any angle.

And because this demographic is so socially driven, of course there’s a built-in option to share on social and solicit friends’ feedback.

Skoda was planning to showcase one of the fundamental values of the brand — Innovation. They came up with the idea of a retrospective look at the history of Skoda’s most notable designs and started AR experience with the 3D model of 1895 Slavia — the first bicycle which was produced by two founders of Skoda. The bike is appearing from behind the crystal — the symbol of the brand. The bike is then followed by 90’s model Favorit and the first fully electric Skoda Vision IV after. These set’s are also accompanied by video explainers, bringing more context around Skoda’s evolution.

Google Translate is a tool to translate with its augmented reality real-time visual features. Hold up the smartphone camera and focusing on the text, Google Translate provides real-time translations of words and phrases from a range of languages. Users download language packs, enabling them to select offline translations when away from the Internet.

One of the most popular mapping apps features an AR mode that helps you navigate to the destination by adding virtual signs and directional arrows over the live view on phone in order to point the way. It’s a definite improvement over the old way of navigating, with the arrows adding a handy visual cue that helps the user to navigate.

Christmas karaoke app with Augmented Reality mice characters on branded OKKO coffee cups. The characters played their tiny instruments as you’re trying to hit the score and win a discount for gas, snacks or other OKKO services. This coffeoke is using marker-based technology. Every cup has an image of a mouse that brings up it’s playing 3D model every time you focus the app camera on an image. The cool thing with markers is that you can track multiple images simultaneously, which allows you to gather a full band of mice playing their instruments by putting different cups together.

In this case, Augmented Reality was one of the engaging features for the mood. Scoring system inside karaoke made it for the bonus system integration.

SketchAR turns a smartphone’s screen into an AR drawing aid, overlaying a sketch or line art image on a blank piece of paper that the user can then trace over or use as the basis of own sketch.

Users can pick from a library of sketches included in the app or transform their photos into traceable line art. SketchAR is meant to work on A4 sized paper or any paper with four reference circle markers drawn to present scale markers to the app.

SketchAR won’t substitute for a good drawing class by any means, but it’s attractive software stuff to play with and one of the best augmented reality apps we’ve seen lately.

Language learning app Mondly adds an augmented reality-assisted spin with a module for ARKit and AR Core-enabled phones. Mondly’s AR features engage language learners with an animated chatbot as well as visualizations of objects and words to help make learning more dynamic, as well as providing instant feedback on pronunciation and any errors.

These AR features come in addition to Mondly’s lessons, games, and practice conversations designed to cover more than 30 different languages.

Vuforia Chalk lands on the list of best AR apps by turning a user’s smartphone into a powerful visual tech support tool. Once the app connects users and tech experts through a video call, they use the phone’s rear camera as a viewfinder to show exactly what help is needed. Both parties can then draw on the screen with augmented reality chalk marks that work like visual annotations, letting find the right buttons, dials, and controls, without the confusion caused by just verbal descriptions.

This app is aimed at changing the way people see books, reading and technology. Many children find reading boring since they have access to all the interactive games. This app wants to empower their love for reading with multilingual AR books. Every page turns into an interactive scene, where reality and fantasy worlds merge. The book is available in English and Spanish; there are also 14 puzzles to play and a secret video game that displays after scanning the book cover.

Amikasa is an another tool for interior design. This app is a perfect app in cases of seeing a piece of perfect furniture but being not sure whether it fits the room or of repainting the walls and wanting to find the right color. This 3D room designer allows to build, restyle, and redecorate home with furniture, flooring, and wall colors available in stores of real brands. Firstly, user has to choose the room shape and set the dimensions of the room. Then, select the wall color and flooring and use the drag-and-drop option to place the furniture.

It’s an app that has a powerful way to connect young learners to reading, writing and digital literacy. Creating a visual story with augmented reality truly engages the students. 3DBear lets students have the STEAM project of their dreams, enhances understanding of complicated topics and concepts through PBL and creates opportunities for students to collaborate and think critically.There’re a lot of benefits in this app. Firstly, it’s easy to use, a smartphone or tablet is all you need.Then, ideal for K-12 and cross-curricular projects.Finally, it promotes problem-solving and increases student engagement through creating in AR.

And last but not least – Amazon AR Player introduces interactive, sharable AR experiences. They are delivered no matter where the customer is.

The user points the camera on your mobile device at the QR Code on an Amazon box, and immerses themself in augmented reality.

It’s a fun way to reuse Amazon boxes until they are set to drop them in the recycling bin.

Amazon AR accesses the camera to digitally render content to create the illusion of digital assets in the physical environment. If the user’s device supports TrueDepth technology, the app also uses a device camera to track facial movements to enable certain features like selfie mode.

Subscribe now!
We won’t bother with the daily newsletter! Only important information once a month.